April 19, 2012
Saw this latest issue of Yum Yum magazine (volume77) in the book stand. The cover of this magazine attract me to have a look at it. I found this very interesting 'kuih' in this month magazine; its main ingredient is Orange Sweet Potato. 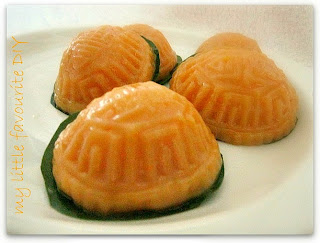 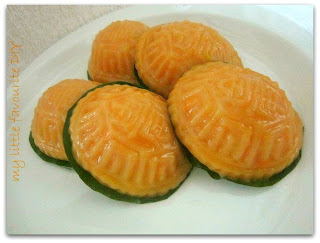 
To do for filling:
1) Steam the soaked mung bean with pandan leaves (knotted) and steam for 30 minutes.
2) Blend in a processor til fine.
3) Cook it with sugar, salt and oil until it firm and form like a paste.
4)Let it cool and roll it into 20g ball.


To do for the skin:
1) Washed and peeled the orange sweet potato. Steam it until it is cooked. Mashed it finely while it is hot.
2) Put glutinous flour, sugar in a mixing bowl. Make a well in the middle, pour oil and hot boiling water in and  mix into a rough dough. Knead in mashed orange sweet potato to form into a pliable dough. Covered and let it rest for 10 minutes.
3) Rolled the dough longish like in picture (a). 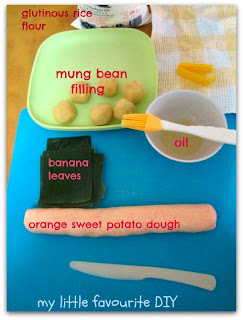 pic. a ~ this are the things mui mui prepared to start assembling the angkus 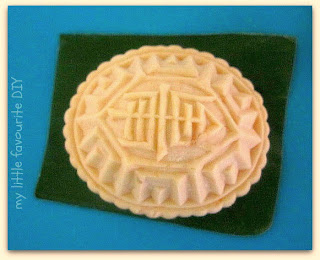 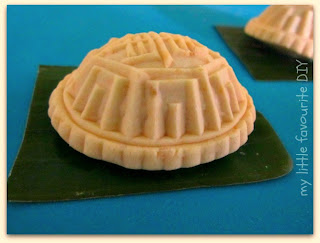 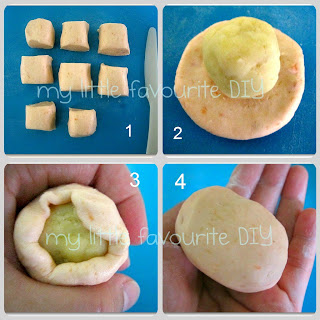 pic. b~ 1) After the dough is ready, divide them into 30g eaches
当粉团搓好,就搓成长条再分每一粒30g~
2) Flatten the dough and add in filling.
3) Wrapped up the filling and sealed the edges.
4) Slightly roll the dough into oblong shape.
**at the stage if your hands get sticky, do rub with a bit of glutinous rice flour to smooth them.

pic d ~ 1) Brush some oil on the trimmed banana leaves. (do not brush too much, just a little on the middle will do)
2) Knock out the molded angku onto the oiled banana leaves.
3 & 4) This is how the knocked out angku look...^^ 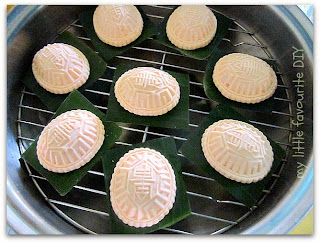 ~Get ready..put into a wok and steam for 7 minutes..
放进锅,用中火蒸7分钟~ 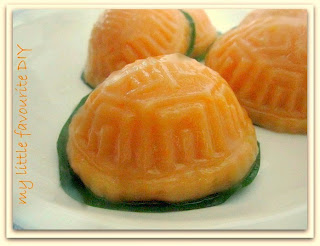 ~After steaming the angkus, brush with cooking oil to prevent sticking..
蒸好的橙菇糕,抹上~ 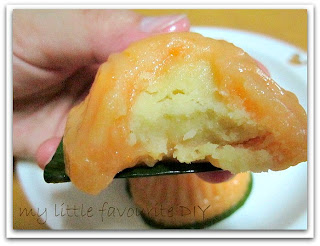 ~DIY your own kuih, you can stuff in lots of filling ..lol
自己DIY的糕点,可以包多多料噢..~
**Notes:
* Mui mui like the angkus to look neat and nice, trimmed the banana leaves round following the side of angkus only after steaming. (this is because angkus may grow a bit bigger after steaming)
* Too prevent angkus from forming a layer of hard skin on top after cooling...do keep in a container or cover with cling foil after it is cool.

Popular posts from this blog

July 14, 2014
I baked this cake once, twice, thirce and now i lost count BUT everytime i bake this cake i feel HAPPY. Hope this happy thoughts and feeling will spread to YOU ^_^ Happy that the cake rise beautifully and with almost no shrink or crack. Happy that my boys and friends love this cake. I baked this chiffon cupcake again for Bake Along event. I am going to Bake Along with these 3 beautiful ladies again.  This is a revisit of this recipe - HERE The previous post of Hokkaidao chiffon cupcake, i used durian cream as filling. Now in this post i used vanilla whipped cream/Chantilly cream as filling. I love to use dairy whipping cream as filling. Just add adequate of icing sugar/castor sugar to the whipping  cream and whisked it to light and fluffy. Then mix in any flavor that you like into the cream and piped it into the cake. Saw some nice and fresh bluberries in the supermarket, i quickly grab some for decoration :D Nice and smooth sides. ﻿   Moist, soft and fl
41 comments
Read more

March 31, 2016
This is an old fashion kopi tiam (coffee shop) bread loaf. It has coarse texture but it is so soft and nice! This coarse texture kind of bread bring back many child hood memories! We use to have this type of bread in the local coffee shop. They will take two pieces of bread, make into a kaya butter sandwich, ( a piece spread with butter and the other piece spread with Kaya.) "I spread with my Homemade Kaya  ^_^   " Before i go further.... Zoe and I would like to give a big THANK to Joyce from Joy 'N' Escapade for being such a wonderful host for Little Thumbs Up - March. We have collected 105 awesome posts, here We will a break in April .... Coming up, we will have another wonderful host from Belgium. She is also a Sarawakian and i am one too. She is  Isadora from Nasifriet . She have chosen TOFU for her theme. Interesting right!! Join us in this coming May and find out how wonderful she is. Let start the TOFU skill in May!!  :D (above was updated on 4/4)
15 comments
Read more

November 10, 2011
This book have been sitting in the recipe book shelf for ages.  It is a Yum Yum magazine, a full colour and step by step wonderful recipes magazines. Every two months a new one comes, the old one will be left sitting behind in the book shelf...:p Sometimes I will take out the previous volume to read. Today i am running over the old volumes again. I am looking for.... this Crispy Prawn Fritter recipe .....'Bingo' I found it in Volume 44 Issue 2006. Just happen that my hubby's good friend gave us some prawns. I tried this and it is really good. You must try this too...^^ Crispy Prawn Fritters Ingredients: 600g medium prawns, shelled but with tail intact 1500ml cooking oil for frying Marinade: 1/2 tsp salt 1 tsp sugar 1 tsp sesame oil Dash of pepper Batter A 150g plain flour 1 tbsp corn flour 1 tbsp tang mein flour 1 tbsp baking powder ( I used 1 tsp double action baking powder) 1 tsp salt, 1 tsp sugar Dash of pepper B: 1 tsp sesame oil 6 tbsp oil
4 comments
Read more